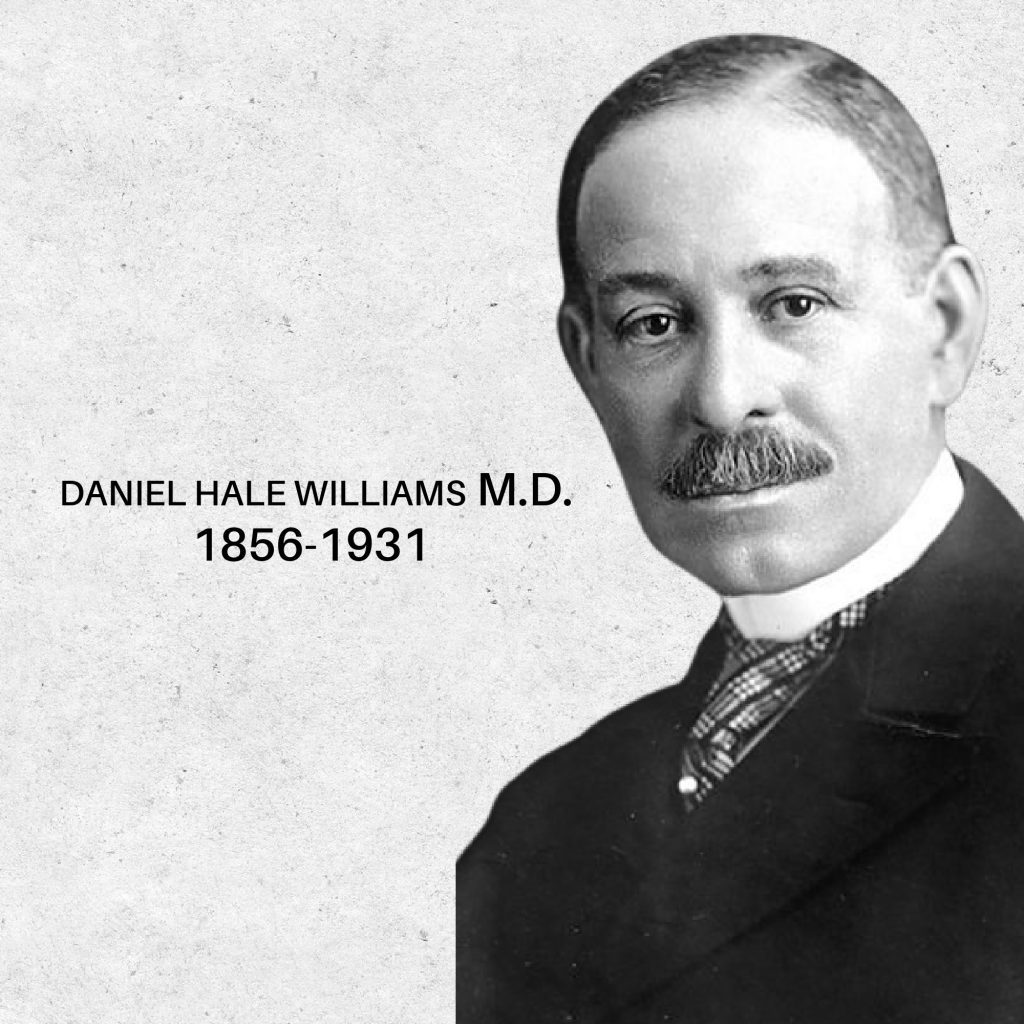 Daniel Hale Williams III: From Shoemaker’s Apprentice to Pioneering Hospital Founder in One Leap of Faith.

Daniel Hale Williams III was a pioneering surgeon best known for performing in 1893 one of the world’s first successful open heart surgeries.  Williams was born on January 18, 1856, in Hollidaysburg, Pennsylvania to Sarah Price Williams and Daniel Hale Williams II.  Following the death of his father, Williams lived with family friends in Baltimore, Maryland, and with family in Illinois, from 1866 to 1878 where he was a shoemaker’s apprentice and barber until he decided to pursue his education.  In 1878, Williams’s interest in medicine began when he worked in the office of Henry Palmer, a Wisconsin surgeon.  In 1880 he enrolled in the Chicago Medical College, receiving a Doctor of Medicine degree three years later.

Immediately after graduation Williams opened his own practice in Chicago and taught anatomy at Chicago Medical College.  He became a trailblazer, setting high standards in medical procedures and sanitary conditions, including adopting recently-discovered sterilization procedures in regard to germ transmission and prevention.  He also avoided the then-common practice of black doctors being barred from staff privileges in white hospitals by starting his own hospital.  In 1891 Williams co-founded Provident Hospital and Training School Association in a three-story building on Chicago’s South Side.  At a time when only 909 black physicians served 7.5 million African Americans, Provident was the first black-controlled hospital in the nation. Yet Provident was also the first medical facility to have an interracial staff and the first training facility for African American nurses in the US.  During Williams’s tenure as physician-owner (1891-1912), Provident hospital grew, largely due to its extremely high success rate in patient recovery: 87 percent.

In 1893, Williams daringly performed open heart surgery on a young black man, James Cornish, who had received severe stab wounds in his chest.  Despite having a limited array of surgical equipment and medicine, Williams opened Cornish’s chest cavity and operated on his heart without the patient dying from infection.  Cornish recovered within 51 days and went on to live for 50 more years.

Now nationally recognized, Williams in 1894 was appointed Chief Surgeon at Freedmen’s Hospital in Washington, D.C.  As Chief Surgeon, Williams set high standards for doctors from all over the world, who came to witness his operations.  He also reorganized Freedmen’s Hospital which had suffered years of neglect, instituting a training school for black nurses, employing a multiracial staff, improving surgical procedures, developing ambulance services, and providing staff opportunities for numerous black physicians.

Although he recognized the value of racial integration in the medical field, Williams in 1895 co-founded the National Medical Association (NMA) because black medical practitioners were denied admission to the all-white American Medical Association.  In 1898, Williams left the Freedmen’s Hospital, married Alice Johnson, and moved with her to Chicago where he returned to Provident Hospital.  Among the numerous honors and awards bestowed on Williams, perhaps the most groundbreaking was his becoming in 1913 the first black member of the exclusive American College of Surgeons. Later he joined Sigma Pi Phi fraternity, the first Greek-letter organization for African Americans.

A year after settling in Chicago, Williams became affiliated with Meharry Medical College in Nashville, Tennessee.  For the next two decades he was a visiting clinical surgeon. He was also now invited to work at larger hospitals including Cook County Hospital, and at St. Luke’s Hospital on Chicago’s South Side from 1907 to 1926.  In 1926, Williams retired from St. Luke’s after surviving a debilitating stroke.  He lived out his retirement years in Idlewild, Michigan, an all-black resort community, until his death on August 4, 1931.  He was 75 at the time of his death.