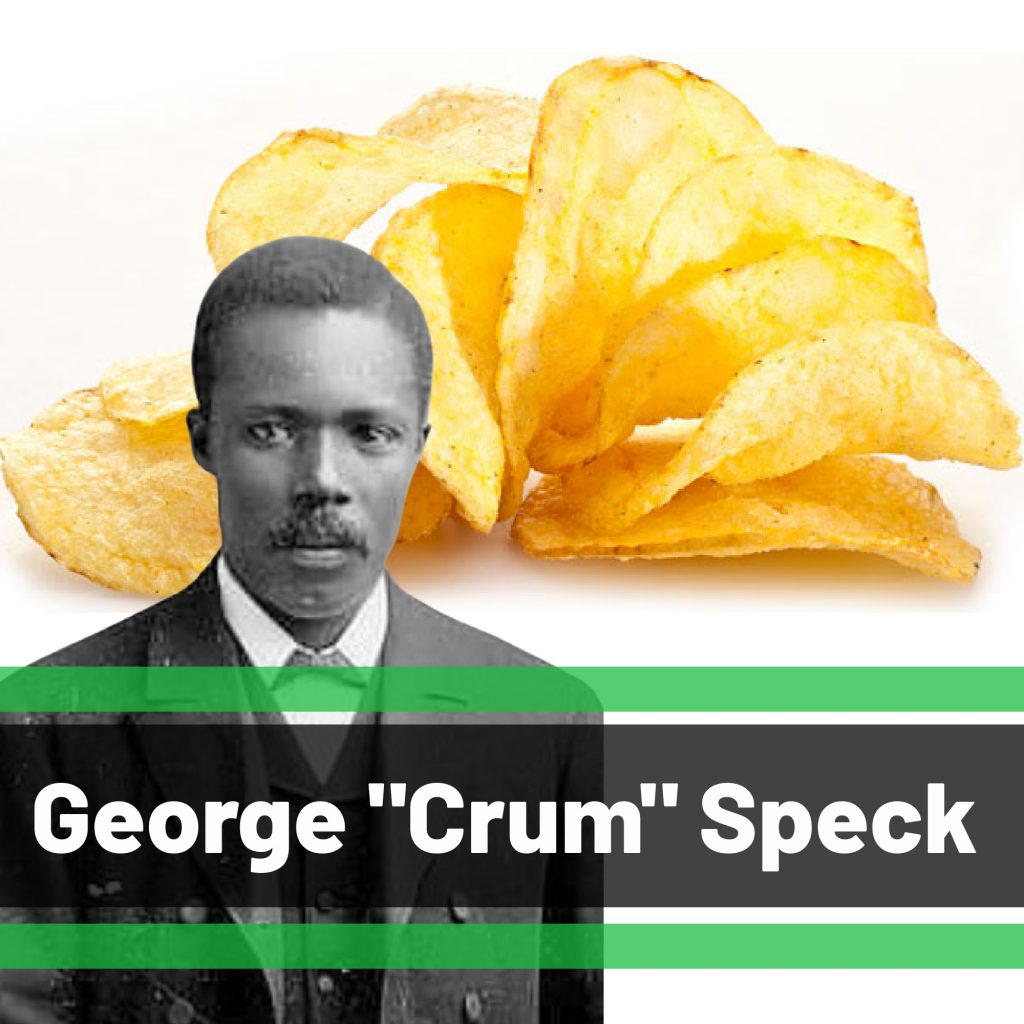 George Crum: Not The Potato Chip Inventor, But Would We have Them Without Him?

George Speck, later known as George Crum and long thought to be the inventor of the potato chip, was born on July 15th, 1824 in Saratoga Country, New York to parents Abraham Speck, an African American, and Diana Tull, a Native American of the Huron Tribe. He had a sister, Catherine “Kate” Speck. Both George and Kate Speck identified as members of the St. Regis band of the Huron. George Speck spent his youth as a guide in New York’s Adirondack Mountains from 1834 to 1850. He was an animal trapper specializing in capturing wild ducks and deer.

In 1853, 29-year-old Speck was hired by Moon’s Lake House, an Adirondack resort on Saratoga Lake near Saratoga Springs that catered to wealthy vacationers from New York City. One regular patron, Commodore Cornelius Vanderbilt, regularly forgot Speck’s last name and called him “Crum.” Vanderbilt relayed personal food requests to “Crum” through the waiters and Speck eventually embraced the name, saying that”a crum is larger than a speck.”

The popular narrative is that George Crum invented the potato chip, a myth eventually debunked by his sister Kate Speck who claimed she invented what would soon be known as the famous Saratoga chips. She said she sliced off a sliver of potato and it fell into a hot frying pan by accident. George Crum tasted the sliced potato and gave his enthusiastic approval of the chip. Even her claim is undermined by the existence of cookbooks in the United States and Great Britain that described earlier versions of the chips that were called fried potato shavings.

There is no doubt, however, that Crum’s promotion of the chip help popularize it.  Wealthy visitors to Moon’s restaurant soon spread the word about the Saratoga chips, often traveling from Boston and New York specifically for the delicacy. After an unsuccessful attempt to take credit for inventing the Saratoga chip, Cary Moon, the owner of Moon’s Lake House, began selling them in boxes, the first attempt to merchandise the product beyond his restaurant.

George Crum opened his own restaurant, Crum’s Place, in 1860 in Malta, New York where he provided every table with a basket of chips. Crum’s chip would remain a delicacy for the elite until the 1920s when entrepreneur Herman Lay brought the chips to the South to introduce them to a wider audience. Lay’s mass production and worldwide distribution of potato chips soon overshadowed Crum’s legacy. Nonetheless, Crum’s Place continued for 30 years until 1890 when he retired from the restaurant business.

Crum married Elizabeth Jarrett in 1853 and the couple had three sons, John, Gilbert, and William, and a daughter, Anne. They divorced in 1857.  He met his second wife, Hester Esther Bennett, who was a regular customer at Crum’s Place. They married in 1860 and remained a couple until her death in 1906. George (Speck) Crum died in Malta, New York on July 22, 1914 at the age of 90.