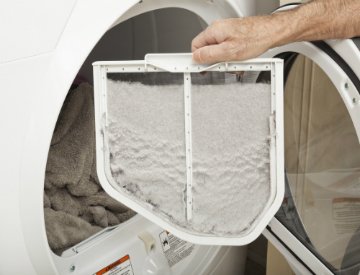 Don’t Ignore Your Dryer Lint: It Could Cost You!

Cleaning out your dryer’s lint trap is a small task that can save you money. ©iStockphoto.com/Roel Smart

A dryer is often an appliance that most homeowners take for granted. They put a load of laundry in it, dry it, and move on with their day. However, if you’re looking to save a little bit of money on your energy bills, then it’s time to begin paying a little more attention to your dryer.

First of all, you should regularly hire a professional that provides dryer vent cleaning in Atlanta to come thoroughly clean your dryer’s vents. Secondly, you need to make sure that you remove the lint from the lint filter every time you dry your laundry.

The lint filter is located in different areas depending on the model of dryer you have, but it should be in a spot that is easily accessible. As your clothes dry, the lint filter will collect lint. If you don’t remove the lint after you’re done drying your clothes, your dryer is going to work very inefficiently the next time you try to dry your laundry.

This is because the lint that collects will restrict the airflow from your heated dryer. Because of this, the dryer will have to work harder in order to dry your clothes. This results in more energy being used – not to mention that your clothes may not dry as quickly, which means you have to dry them for a longer period of time – also a big waste of energy.

There’s also the question of safety. Lint is very flammable and if it collects too much, the heat that the dryer produces could end up igniting it. This is also why you should hire a professional that provides dryer vent cleaning in Atlanta to come to clean the lint and debris from the dryer’s vents as well. Cleaning the lint out of the filter is relatively easy. Just wipe your fingers over one end of the lint filter to the other and the lint should just peel right off. Moistening your fingers can help make the lint stick to your fingers.

To start a fire, use dryer lint, which is highly flammable. As well as the dryer lint, you’ll need cardboard egg cartons and candle wax. Making this is a quick, 15-minute process. You can compost your dryer lint and then use it for the garden. You will also need white glue, dishwashing soap, and warm water in addition to the dryer lint.

You can stuff pillows and stuffed animals with dryer lint, which is just freshly laundered fiber leftover from washing your clothes. Cornstarch can be used to soak up spills if you run out of dryer lint. Keep your dryer lint. Utilize it to create a unique, handmade paper for cards and scrapbooks. Try using dryer lint instead of newspaper strips for your next paper-mâché project. There will be fewer layers and it will be easier to mold.

Be sure to clean your lint trap in order to save money on your energy bills, and contact us at Daffy Ducts for more information on dryer vent cleaning in Atlanta.